10 reasons why “catholicism” is ANTI-CHRIST 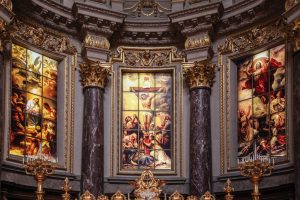 The Catholic church is one of the worldwide most powerful and known religions on this planet that uses the Bible and claims to follow God and the Messiah of the Bible, which would be “Jesus Christ”.

As one who grew up in the doctrine of this religion, somethings did not feel right.

By reading the Bible with fresh eyes after staying away from it for a while(over 15years), I would like to present you with arguments out of the same book Christianity uses, that might make you think twice about the richest institution on this planet whether they might be the Antichrist

Dictionary.com has four definitions for the word Antichrist which all boils down to false Christ as a particular personage or power, variously identified or explained, who is conceived of as appearing in the world as the principal antagonist of Christ.

So let us compare some practices of the Catholic church with the Bible to see if they are a power that opposes the Christ of the Bible.

10. It is a common knowledge that most priests in the Catholic church are addressed by their congregants as Father.

The Question you are asking is what could that possibly have to do with the church opposing Christ since these men are spiritual fathers to their subordinates.

To be able to answer that we would have to see what the Bible or the word of Christ has to say to this practice.

Mathew 23:9
“And call no man your father upon the earth: for one is your Father, which is in heaven.”

The Bible clearly states in this verse not to call any priest(if read in context) your Father or Master while on this earth, since those positions are given to God and Christ.

The Catholics using the title of the Holy Father for the pope is, therefore, putting himself not only above Christ but also in the seat of God and so opposes the scriptures ergo Anti Christ.

The “Holy Rosary” which can not be described as Holy(different Topic), refers to a form of prayer used in the Catholic Church to the string of knots or beads used to count the component prayers like as follows.

“Hail, holy Queen, Mother of mercy, our life, our sweetness, and our hope. To thee do we cry, poor banished children of Eve: to thee do we send up our sighs, mourning and weeping in this valley of tears. …Pray for us O Holy Mother of God”

The Questions at hand are why are you crying to Mary and why are you asking her to pray for you?

In the Book of Mathew 6:6 it states:
“But thou, when thou prayest, enter into thy closet, and when thou hast shut thy door, PRAY TO THY FATHER which is in secret; and thy Father which seeth in secret shall reward thee openly.”

The Bible is obviously telling its followers to pray to the Father which is God and not the pope directly but once again, it seems that the Catholic church opposes Christ by not doing as the Scriptures say. Until this day no Catholic has been able to prove this prayer as a legitimate prayer in the Bible.

8. Christmas (Hide your Children because this one might hurt)

According to Wikipedia and Christianity Christmas is an annual festival remembering the birth of Jesus Christ, observed primarily on December 25 as a religious and cultural celebration among billions of people around the world.

In the Book of Jeremiah 10:2-4, we read things that Christians are not supposed to be doing, which reminds us of what we today call Christmas:

“Thus saith the LORD, Learn not the way of the heathen, and be not dismayed at the signs of heaven; for the heathen are dismayed at them.
For the customs of the people are vain: for one cutteth a tree out of the forest, the work of the hands of the workman, with the axe.
They deck it with silver and with gold; they fasten it with nails and with hammers, that it move not.”

I do not know any other celebration that involves cutting trees and decorating them with silver and Gold. The Pope has some explaining to do here. If you think you can help him, please drop a comment.

One might also say Christmas is to remember Christ but according to 1 Corinthians 11:24 He gave an order how to remember him. Once again it seems like the Catholic church just does what it wants and so oppose Christ (Antichrist) and God.

It is also widely known that Catholic priests are not allowed to marry, although some exceptions may exist if there is a change of denomination.

1 Timothy 3:2-5 says “A bishop then must be blameless, the husband of one wife…”

How come then the Catholic church practices Clerical celibacy and once again opposes the words of the Bible? The truth stems from plots and money and is not cut out for this list. In the fifth verse, the Bible even states ” (For if a man know not how to rule his own house, how shall he take care of the church of God?)” How will one that never had a wife then help you with your marital affairs?

1 Timothy 4:1-3 Also speaks of evil spirits forbidding to marry. Is the Catholic church the Antichrist? That is for you to decide.

Catholics mostly do worship on Sundays and proclaim it to be the Sabbath. The Bible however never gives the days names. In Genesis, we learn of the first day, second till the seventh day.

How did the seventh day then become the Sunday?

When Catholics are asked why they pray not only to Mary but also to saints, they mostly answer “When you ask someone to pray for you are you worshiping that person?”

Catholics see it as normal and biblical to ask those “close to God” to pray for them.

Once again an act opposing what the Bible says.

We learn from the Catholic church and most Christian churches, that God loves everybody. This always seemed to be okay with me till I read Romans 9:13 where it states “As it is written Jacob have I loved, but Esau have I hated”

How does God love the entire world, when he just stated that he does not. In fact, he hates Esau… whoever that may be. It actually is talking about a people but that’s a different list.

What we have learned from the church does not seem to be in line with what the Bible says and therefore opposes the doctrine of Christ. 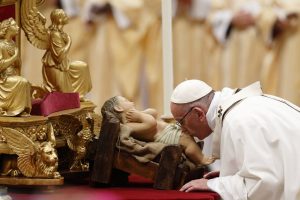 Exodus 20:4-5 says not to make any graven image to bow yourself down unto it.

Nevertheless, we see the Pope himself bowing down to statues on most Occasions and sometimes even kissing it.

This is a case of Idolatry in my eyes, opposing what the scriptures say.

2. Christ was the only Child of Mary and Joseph

Most Catholics believe that Christ did not have any siblings because God did not want anyone else to come through the same vaginal parts to this world.

This is what the Bible says about that in Mathew 13:55-56:
“Is not this the carpenter’s son? is not his mother called Mary? and his brethren, James, and Joses, and Simon, and Judas?

And his sisters, are they not all with us? Whence then hath this man all these things?”

1. The virgin birth of Jesus.

The virgin birth of Jesus is the belief that Jesus was conceived in the womb of his mother Mary through the Holy Spirit without a human father and born while Mary was still a virgin.

Why does the Bible in Mathew Chapter one talk about the genes of Christ, and Joseph being his biological father in verse sixteen?

In the Book of 2 Timothy 2:8 it is written: “Remember that Jesus Christ of the seed of David was raised from the dead according to my gospel”.

Seeing that the word seed means sperm in this context, Joseph had to have done the did with mary if you know what I am saying.

If not it would mean Christ was not like us but that is not what the Bible says. Hebrews 2:17 states “Wherefore in all things it behooved him to be made like unto his brethren..” Were his siblings also made by the Holy Ghost?

2 John 7
“For many deceivers are entered into the world, who confess not that Jesus Christ is come in the flesh. This is a deceiver and an antichrist.”